Turkey: Everything is alright 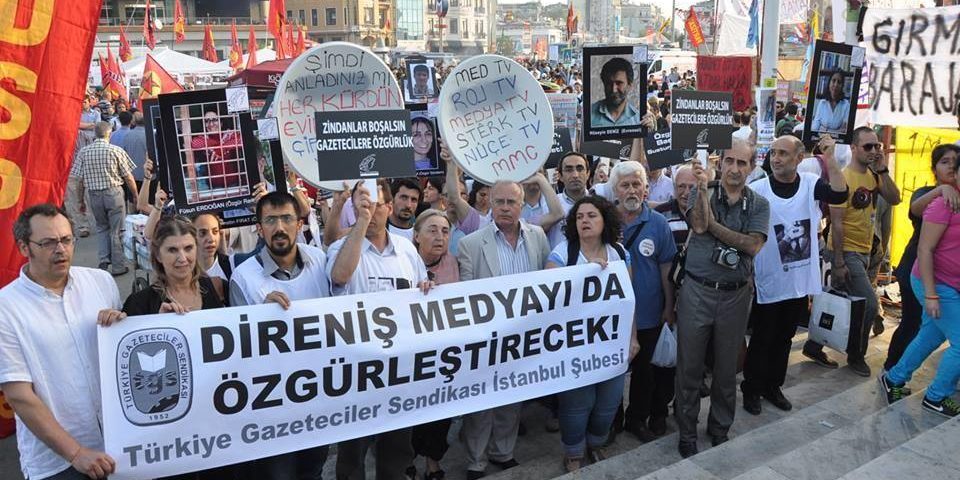 In June 2013 Turkey experienced the biggest social uprising of its history. The resistance began at Gezi Park which is next to the Taksim Square, the “heart of Istanbul”. It quickly spread and turned into a rebellion against the government’s authoritarian policies.

These peaceful demonstrations with no leader or organization were different, clever, energetic and full of humour. People of different political views got together first time. Kurds and Turks, those who drink alcohol and those who pray resisted in the same streets. The humorous slogans on the walls were actually saying “we don’t give a damn about you” and were appalling the dominant political discourse which was carefully constructed in the last 10 years.

However the TV screens were cold while the streets were warm. The broadcasting of the “Penguins: Spy in the Huddle” documentary at prime time by the CNN Türk news channel has become the symbol of the censorship in media.

On the other hand, those who insisted on doing journalism in spite of the censorship lost their jobs. Since May 27, the beginning of the Gezi resistance, 14 journalists have been fired and 22 journalists resigned.

Journalists’ only problem was surely not the censorship. During this period, the state terror on the streets unprecedentedly increased. Police targeted reporters with gas canisters and water cannons, fired plastic bullets at them, and beat them. In other words the government openly gave us the following message: “Don’t go out, don’t cover news”. The net result of this period of 4 months was heavy: 153 journalists, amongst whom 10 were from international press, were injured. 39 journalists were detained and 3 of them were arrested. Moreover, even a single policeman who exercised physical violence to journalists did not receive any punishment. Verbal harassment and insult against journalists became ordinary.

Meanwhile what did the Journalists Union of Turkey do?

– In the first place, our members on the field built solidarity net for reporters against the police violence. Journalists tried to prevent their fellows from being the target of physical violence and being taken into custody. And sometimes they managed to avoid these to happen.

– Our young members stood ready in front of hospitals, police stations and courts. Every single case was followed and information was tweeted.

– Acts of censorship and violence against journalist were taken into record, announced to the public opinion and condemned with daily statements.

– Criminal complaints were made for the acts of violence against journalists.

– The prefecture and police officials were notified about journalists’ complaints.

– Journalists who were fired or who had to resign were encouraged to inform the public opinion about what happened to them.

– Statements were made particularly for preventing the public rage against the censorship from being directed at the journalists on the field. A march was organized in the Gezi Park with the banner “the resistance will also bring freedom to the media”.

– We participated in the “park forums” which could be considered as the local public assemblies of the Gezi movement and we discussed with citizens about the situation in the media.

– Together with the journalists who are not our members, we organized a mass demonstration with the motto “penguins are nice when at the Pole”. The march in Taksim / İstiklâl Avenue was obstructed by the police. Nevertheless it was the most crowded journalist demonstration in recent years.

Despite the heat and activism of these exceptional days, we did not forget our 62 colleagues who are in jail:

— In order to draw public attention to this problem, we prepared a 44-second-long video. The title of this video which was uploaded to YouTube and disseminated in the social media was “Freedom to journalists, right now!”

— We invited citizens and reporters to follow the cases of imprisoned journalists. As the Union, we followed the cases. We made statements before and after the hearings.

— We issued calls about sending postcards and letters to the journalists in prison.

— We prepared a common database with other NGOs working in the field of freedom of expression that will help us follow and keep track of the information about the cases.

— In all these efforts we stressed the inaccuracy of the belief that the journalists in jail are terrorists.

We surely don’t consider what we have done sufficient. We are confident that we can conduct broader and more efficient activities based on the milieus we are organized in.

The following expression which is popular –and sometimes overused– in Turkey can actually be said now: Nothing will be the same anymore.

“Everything changes under a calm appearance. Everything changes within every class…” In their movie Tout Va Bien (Everything Is Alright, 1972) directors Godard and Gorin make the characters say that and make them ask the following question: From where do you start changing everything? The answer is clear: From everywhere.

Almost everyone agrees that the Gezi resistance has changed things. Unions and professional societies are not exempt from that. While some people wait the change with fear, we have chosen to make our sail move with the Gezi wind: We have younger members*** in our executive bodies, the representation of women is increasing, we are active in social media**, the length of our speeches has become shorter, our statements are more creative and we are trying to deal with our communication affairs with the support of a professional agency. We know that journalists are aware of and praise all these efforts.

No wind can help a captain who doesn’t know where to go. Hence, independent from the reality of the media order in which we live, we are ready for everything and we know what our objective is.

Alternative media whose popularity has increased with the resistance, the resistance’s own media, and the mainstream media… We are in all these channels and we have to be organized in all of them.

That’s because the freedom of press can only be possible with organized journalists.

** Thanks to this new approach, the number of the followers of our account @tgs_org_tr increased six times in four months.

*** The average age in our renewed Istanbul and Ankara branches is around 30 and the representation of women is above 50 per cent.