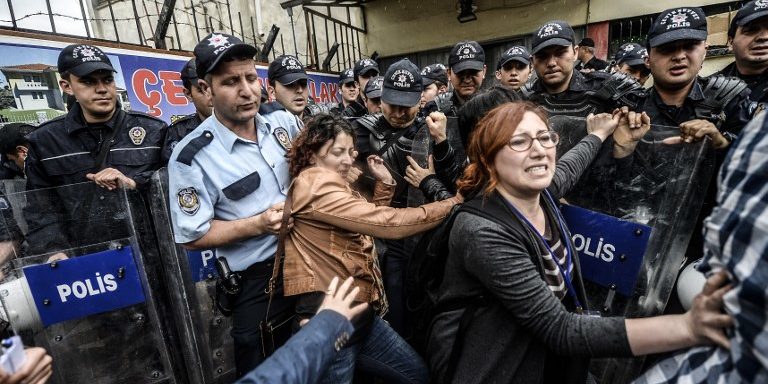 The European Federation of Journalists (EFJ) has backed the urgent call from its affiliate in Turkey, the Journalists’ Union of Turkey (TGS for Türkiye Gazeteciler Sendikasi), condemning police and state violence against journalists covering the ‘‘Soma tragedy’’ in the western province of Manisa (Turkey).

According to media reports, at least 301 miners have died after an explosion at the Soma mine on 13 May. Many journalists have been sent to cover this event and investigate the causes of the explosion and its impact on the people. However, journalists covering the event have become the target for police forces who used disproportional violence against them. The TGS, together with the EFJ, have complied a non-exhaustive list of journalists who were attacked by the police during the coverage of the ‘‘Soma tragedy’’ :

– Riza Özel, President of the Association of Photo-correspondents in Turkey, was injured by plastic bullets fired towards him;
– Journalists and correspondents covering the Turkish Prime Minister visits in Soma was injured by the bodyguards;
– Photographer Nazim Serhat Firat was under custody because he was taking picture of protesters being hostile towards the Prime Minister.
– Burak Öz, correspondent for Karsi Direnis newspaper, was arrested by Prime Minister’s bodyguards while interviewing the family members of dead miners.
– Journalist Onur Öncü was beaten after having showed his press card;
– Journalists and lawyers was threatened by police near Soma teachers house;
– Serkan Bayraktar, cameraman working for Ulusal Kanal TV channel, was beaten by the police while he was filming;
– Journalists were being targeted by some local groups accusing them of ‘‘spread chaos in the country’’;
– Some internet websites labelled journalists as ‘‘provocateurs’’;
– Journalists and union members were under police attacks during the anti-governmental protests following the‘‘Soma tragedy’’;
– Recep Yilmaz, photo correspondent for BirGün, was injured by police in Ankara while he was taking pictures ;
– In the province of Kocaeli, the police attacked protesters and journalists;
– Yigit Ali Mercan, cameraman working for Hayat TV, was forced into the police vehicle. He was later released after he showed his press card;
– Umut Tütüncü, journalist working in Istanbul, was beaten by the PM’s bodyguards and threatened afterwards.

‘‘Following the workers’ death in Soma, the health and safety of workers in Turkey has become a heated topic in the country. Concerning the journalistic community, police violence faced by journalists is one of the main obstacle to create a safe and decent working conditions for journalists in this country’’, wrote the TGS which has urged the Turkish Interior Minister to end the police violence against journalists.

The verbal and physical violence against journalists working in Turkey has also become an increasing concern among European journalists. The German Journalists’ Association (DJV) has today reacted with outrage to the death threats received by Hasnain Kazim, the Turkey correspondent of the German news portal Spiegel Online. On Twitter, some users has been called upon to assassinate the journalist because he was quoting a protester saying ‘‘Erdogan, go to hell!’’ following the mine disaster in the city of Soma. The DJV President Michael Konken made ​​it clear that it was the task of correspondents to provide a realistic picture of the events. ‘‘If the anger of the people of Soma is directed towards the Turkish Prime Minister, it should be reported by the media,’’ said Mr Konken reaffirming the solidarity of the DJV. “It is intolerable that Mr Erdogan’s fans are intimidating our colleagues and stifling press freedom,’’ added Michael Konken. He has also reminded the public that 25 journalists are still in jail in Turkey because of doing their jobs. “From a state which is applying to become a member of the European Union, we expect at least the observance of the basic fundamental rights such as press freedom,’’ said Mr. Konken.