Conference to tackle press freedom and labor rights in Turkey 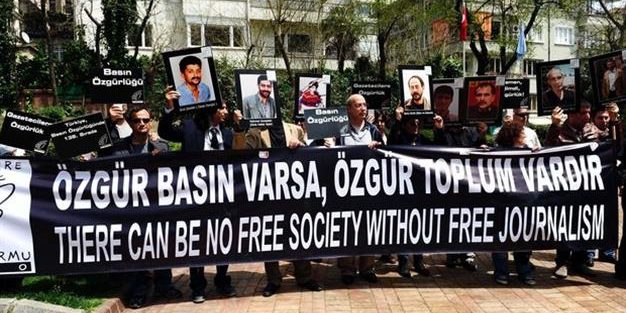 “Jailed journalists, threshold for collective bargaining, no freelancers rights, refusals of press cards, restrictions of accreditation, growing prosecutions, less freedom to publish.” This bleak picture will be at the heart of an upcoming conference on press freedom and labor rights in Turkey, titled “Turkey: Fighting for journalists rights and freedoms in a politically polarized country” and held on Sept. 17-18 in Istanbul.

The objective of the two-year project, run by TGS and IFJ, was to promote press freedom, and defend the professional and labor rights of journalists as key actors in the exposure of human rights abuses. Mustafa Kuleli, General Secretary of TGS, spoke to Hürriyet Daily News about the project, the conference, and the state of the media. “The project very much integrated with the daily work of the TGS,” said Kuleli. “Dozens of meetings and workshops with journalists took place in various cities, press trials were monitored with observers from Europe, publications were disseminated.”

Oliver Money-Kyrle, Assistant General Secretary of the IFJ and who is responsible for the supervision of the IFJ’s global project programme, including Turkey, also spoke to HDN: “The project supported the free journalism campaign, enabling us to maintain the monitoring and campaigning around jailed and prosecuted journalists, including the participation in a number of court cases and the organizing of appeals among European affiliates on the situation in Turkey.”
Talking about press freedom

Praising the commitment and dedication of TGS, Money-Kyrle said, “The TGS showed that journalists did not have to put up with intimidation and censorship, that they did not have to be terrified of telling the truth and asking awkward questions, that they could and must demand basic labor rights and decent conditions if their profession is to be saved and that there was an organization prepared to fight for them.” That said, Money-Kyrle added, “But that it can only do so if journalists are prepared to unite around it together.”

Kuleli agrees on the sentiment. “It is hard to talk about press freedom when the media is not organized,” said Kuleli. “Pressured by both the government and the higher management, journalists are hardly able to do their work. Instead of scoffing at the various professional organizations, journalists should choose one and try to change it within. Because solidarity will make us stronger.”

The conference will feature some strong names as speakers and panelists, that include Can Dündar, Cumhuriyet daily’s Editor-in-Chief; journalist Andrew Finkel, speaking for P24 (Platform for Independent Journalism); Hakkı Boltan from Free Journalists Association; Ayşenur Arslan from Halk TV; Hasan Cemal from T24; and Şirin Payzın from CNN Türk. There will be keynote sessions and discussions on critical topics like campaigns on press freedom in Turkey, peace journalism, reporting as LGBTI journalists, press trials and monitoring, trade unions, labor rights, recruitment of women journalists, and the new media environment between elections.

A conference for Turkey’s journalists

The press seems to be taking the biggest toll with the rising tension across Turkey post-June elections, and towards another election in November, according to Kuleli. “President Erdoğan has exerted even more pressure after the elections, blaming Peoples’ Democratic Party (HDP) and the media,” said Kuleli, referring to Justice and Development Party’s (AKP) recent failure in the parliamentary elections. “Difficult days await us until the Nov. 1 elections.”

“Beyond the immediate election climate, Turkey needs to undergo a significant structural reform to enable journalists to be truly free,” said Money-Kyrle. “It needs to end its assault on social media through the provision of unlimited online censorship power to the Turkish telecommunications authority, it needs to create a transparent ownership structures so that media owners cannot benefit from corrupt political deals and favors, it needs laws that guarantee the rights of journalists and of freedom of expression.”

“It also needs to enable journalists to organize freely in labor unions to ensure that salaries, job security and editorial independence is guaranteed,” said Money-Kyrle. While Kuleli added, “If journalists are to act professionally they should be treated as professionals. You cannot expect someone earning just 2.000 TL to be a press freedom hero every day. The management needs to overcome its fear of unions, and the media staff needs to unionize like their counterparts in a civilized world.”

These will be some of the hot topics in the International Conference on press freedom and labor rights in Turkey, “Turkey: Fighting for journalists rights and freedoms in a politically polarized country.” As for the conference, Money-Kyrle said, “This is a conference for Turkey’s journalists. It’s for them to confront the issues, and find a strategy, leadership and solidarity that can lead them into a better future.” Check http://europeanjournalists.org/ for details of the conference.