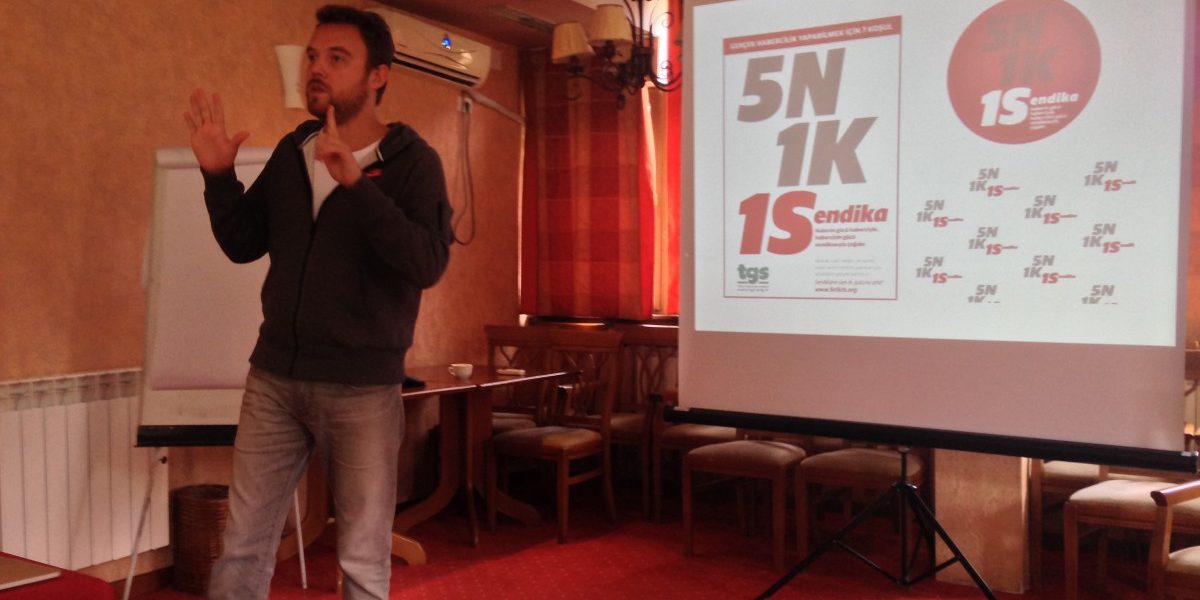 Board members of the Journalists Union of Turkey (TGS), together with the European Federation of Journalists (EFJ) and the International Federation of Journalists (IFJ), organized this weekend (21-22 March 2015) in Istanbul the union’s third Strategic and Development workshop in a year. This was an opportunity for the new board (elected at the TGS Congress in December 2013) to evaluate their recruitment and development strategies, identify new areas of potential growth, reassess all ongoing projects with partners and take the necessary steps to move forward.

“Around 95.000 workers are active in the Turkish media sector (television, radio, newspapers, magazines, print industry). It’s striking to compare the affiliation rate to trade union organisations between “blue-color” workers in the industrial areas (above 10 %) with the same indicator among journalists, considered as intellectual “white-color” workers, where this rate is around 6 %,” says Mustafa Kuleli, General Secretary of Journalists Union of Turkey (TGS). “Many sociological and economical reasons can be mentioned to explain the low level of trade union density in the media sector but we think that the old-way of doing trade unionism plays also an important role in this situation. The trade unions did not managed to give an answer to the needs of their members. When we talk with our members and with young journalists, they tell us that they see trade unions as something from the 70’s, they consider the unions as old-fashioned, not appealing, an occupational organisation for the retired people and totally living under nostalgic ideas. They don’t see the unions as organisations of the 21st century. In Turkey, we are taking those comments very seriously and we are working now to change this image by reviewing our working on our visibility, our vocabulary, our activities, our priorities, our recruitments and our global visions. We should do everything to make trade unionism a modern, contemporary, beautiful, efficient, useful and trendy organisation. And this new strategy seem to be a good one since we see a growth of +25 % in members, four new collective agreements have been signed hence workers rights have been better protected and a new freelancers section has been created in order to get them inside our organisation. But we still have enormous problems like the unemployment rate in journalism (31%) compare to all sectors unemployment rate in Turkey (9,9%). So, we loose members when they got fired and are unemployed. Low salaries are also a big problem, we can’t expect from someone working for a monthly salary of 500 EUR to be a press freedom hero and to produce high quality journalism”.

“I usually give the same example to demonstrate solidarity : if take a single pen, you can easily break it by hand but if you take more than ten pens and attach them together, it’s really strong, you can’t break them anymore. The trade union is trying to be this link that attaches all the journalists together and make them unbreakable”, explains Mustafa Kuleli.

8 reasons to be a member of the TGS

-Better protection of the status against the employer, get protection for the wages

-Better working conditions and more safety and humanity at work

-Freelance journalists can get International Press Card through professional recognition

-Solidarity is important among journalists and media workers in Turkey and globally.