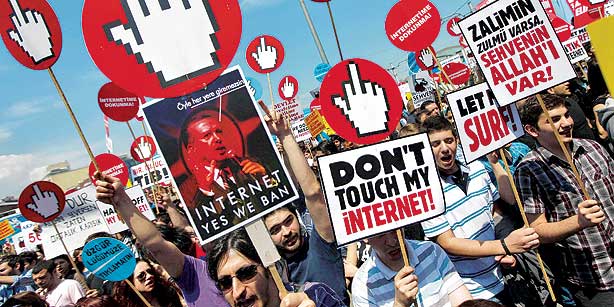 A black curtain has been preventing the public from receiving news since certain media outlets’ websites have had all access to their sites from within Turkey blocked since July 25, just as the cease-fire between Turkey and the Kurdistan Workers’ Party (PKK) ended and the country enters a war against radical terrorist group the Islamic State in Iraq and the Levant (ISIL).

Five days after an attack by an ISIL suicide bomber that killed 34 activists and injured more than 100 in Suruç, near the Turkish-Syrian border, the first wave of censorship hit the country as Turkey plunged into a war against terrorism.

The Ankara Gölbaşı Penal Court of Peace ruled to block 96 websites and 23 Twitter accounts after a complaint was filed by the Telecommunications Directorate (TİB). The ruling was made on the grounds that the websites and Twitter accounts were spreading propaganda for ISIL, the PKK and the Revolutionary People’s Liberation Party/Front (DHKP/C), according to the court decision.

With Turkish politics becoming increasingly complicated with every passing day and no government having been formed since the June 7 general election, experts suspect that the interim government is enforcing censorship because they are trying to hide information from the public.
“The interim government is trying to hide their dirty work by working to censor Internet sites and social media platforms to prevent the public from learning the dangerous games they are playing. The latest blocks are carried out with the purpose of intimidating the media,” the secretary-general of the Journalists Union of Turkey (TGS), Mustafa Kuleli, explained.

The ideologically leftist website sendika.org has also been blocked and has since been operating via sendika1.org. It has published a statement condemning the blackout: “TİB justified its action by invoking technical and legal reasons, but what has occurred has nothing to do with technical or legal requirements, it is overt fascism. Censorship of the free press is an attack on people’s right to news by a fascist government that has stooped to launching a war and exploding bombs, all with the aim of staying in power. It is not simply a question of obstructing access to a few oppositional news sites; it is an attempt to obstruct access to democracy. In short, it is fascism.”

The decision to block these news outlets cited the highly controversial Law No. 5651, which provides for the right to block access to a website in Article 8/A, “[Websites can be blocked] in the name of protecting property and life, national security and public order and preventing a crime.”

The majority of sites that have been blocked are Kurdish media outlets, including ANF, ANHA, the Dicle News Agency (DİHA), Rojnews and Özgür Gündem. Kuleli also noted: “Because the Internet is the way people access basic news media today, every intervention on the Internet should be considered an attack on press freedom. With nearly 100 websites, most of which are Kurdish, and over 20 Twitter accounts blocked, this is an open attempt at censorship. TİB does not have the right to restrict the public’s ability to access the news.”

“A journalist’s responsibility toward the public takes precedence over all other responsibilities. Using the excuse of ‘national security’ is not a pretext for violating rights in efforts to prevent citizens from learning the truth. The essence of journalism is to provide information that those in power do not want to be disclosed,” the TGS secretary-general said.

DİHA’s İstanbul news director, Çağdaş Kaplan, also spoke with Sunday’s Zaman. He explained that the block on access to news outlets is nothing less than outright censorship. “I can say that this is clear censorship because they have shut access to the entire site. We have not received any warnings from TİB saying, ‘This article must be taken down because the content is illegal.’ Instead, they have shut down the entire website,” he said.

“We are not just a news website, we are a news agency and we have over 150 subscribers from national newspapers, television stations and so forth. We have thousands of followers from the public. We, as an agency, reach our followers through the Internet, but you are blocking access to the agency’s website. Then the government is completely putting a stop to their ability to report the news,” Kaplan noted.

Kaplan explained that TİB received the order from Prime Minister Ahmet Davutoğlu to have the website blocked and that they are working to fight the decision, though it has been three weeks since the blocking of access has been enforced. “Our lawyers applied to the Constitutional Court yesterday. We have asked that the court recognize that this is a violation of rights. We also requested that this decision be overruled. Now, we are just waiting. If this is dismissed then we will take it to the European Court of Human Rights [ECtHR]. Because we are a news agency, we have also suffered commercial loss, so we have additionally filed a lawsuit seeking compensation,” said Kaplan.

However, last Saturday proved that it is not just critical and Kurdish media that are viewed as a threat as data-based Dağ Media was blocked on an order from TİB. While the previous outlets are widely viewed to be politicized, pro-Kurdish or leftist media, Dağ Media is a news outlet that uses data as the basis for their articles and stays away from sensationalism. While many, including Pınar Dağ, the website’s founder, were shocked when the block was enforced on the news outlet, some were not so surprised.

Veteran journalist and founding member of the Platform for Independent Journalism (P24) Yavuz Baydar has been monitoring censorship in the Turkish media very closely, telling Sunday’s Zaman: “Blocking access to Dağ Media is both puzzling and not. This is one of Turkey’s foremost data-based sites and very keen on factuality and impartiality. One can only speculate that some of its content related to, perhaps, the recent violence, and data pouring in from affected regions may have been seen as ‘disturbing’ by the authorities.”
“But one point, even since before the Gezi protests, is certain: Under the growing conjuncture of oppression, the independence of conventional and digital media is and will remain under restrictive assaults,” Baydar bleakly concluded.