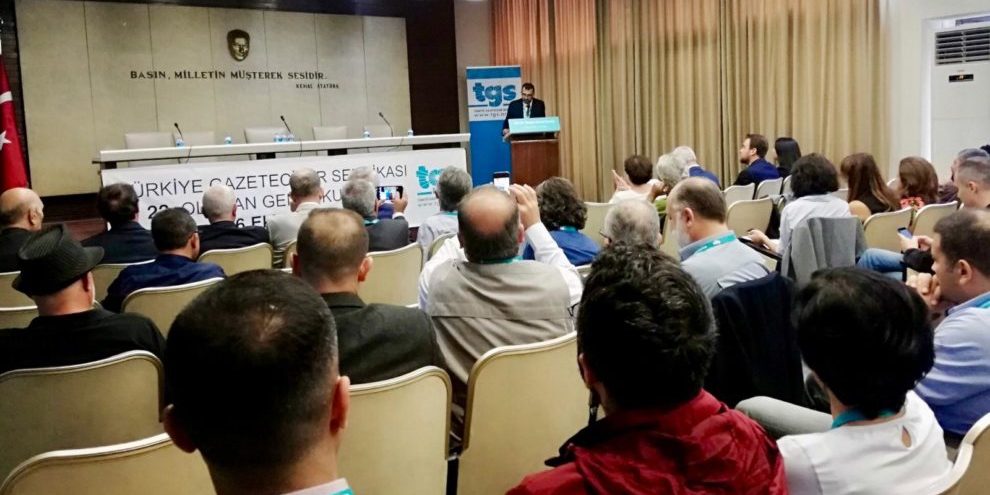 The Journalists’ Union of Turkey (TGS) has elected the members of its new board with a vow to keep defending the freedom of the press.

The union’s 22nd Congress was held at its headquarters in Istanbul on Oct. 5-6. 82 delegates that represent 1,450 members voted in the election for the new board, which will head the union for the next four years.

Gokhan Durmus was re-elected as TGS’ president with 71 votes, while Ilkay Akkaya remained as the union’s secretary-general with 53 votes. Ozan Yurtoglu became the vice president with 58 votes. Demet Culha was elected as secretary-general for finance (62 votes), Mustafa Kuleli for organization (62 votes) and Ipek Yezdani for education (63 votes). The board retained its principle to elect at least half of its executives from women candidates.

President Durmus thanked the delegates in his speech, stressing that TGS will keep working for the freedom of the press despite the Turkish government’s continued pressure on media outlets. He called on all journalists to unionize “for a better life.”

The TGS’ congress was held under the motto of “the Power of Journalists” this year. The delegates approved several motions, including ones that urged new campaigns for the freedom of imprisoned journalists and for gender equality in media outlets.

The European Federation of Journalists (EFJ) President Mogens B. Bjerregard reassured the audience in his video message that EFJ’s support for Turkey’s journalists will continue and increase. “We are really impressed of the way that you in Turkey have been able to do your work in such difficult conditions which get worse and worse for journalists and media freedoms. You were able to do so much work and so much achievements,” he said.

While other Turkish unions were represented at the congress, a number of European media organizations, including journalists’ unions from Germany, Spain, Greece, Sweden, Poland, Croatia, Cyprus and Serbia, sent greetings messages.