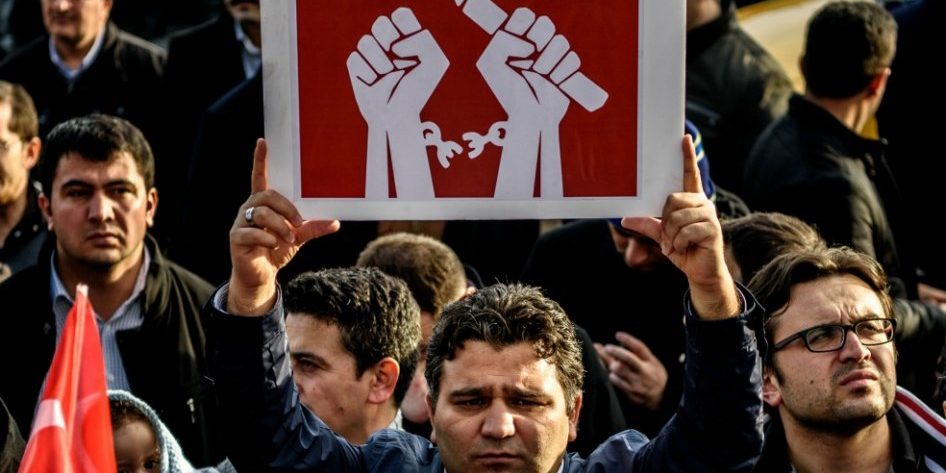 As arrests of journalists and media closure continue, the European and the International Federation of Journalists (EFJ/IFJ) call on the European Union to take additional steps to hold Turkish president Erdogan accountable for press freedom breaches.

Since the coup aimed at toppling President Erdogan failed on 16 July, the EFJ and IFJ have been alerting on the number of arrests of journalists and media closure for being allegedly associated with the pro-Gülen movement accused of being behind the failed coup.

The situation came to a point where local media’s fear to be arrested is leading to an increasing muzzlement of the press, thus infringing fundamental human rights such as freedom of expression and the public’s right to know.

According to EFJ/IFJ latest information:

On 27 July, arrest warrants were issued against 47 former staff of the Zaman newspaper, an official said. Zaman daily columnist, Şahin Alpay, has been detained after police raided his house in the early morning hours. Lale Sariibrahimoglu, who used to work for Zaman and Today’s Zaman and currently reporting for IHS Jane’s Defence Weekly, was taken by police from her home. Columnist Nuriye Akman (former Zaman Daily), former Zaman writers Ali Bulaç and Mümtazer Türköne are also in custody.

According to Bianet, Dicle News Agency (DİHA) and Özgür Gündem websites were also blocked on 27 July by the Telecommunications Communication Presidency (TİB) due to “administrative injunction”. Such a blocking is not the first of its kind since DiHA has been blocked 43 time this year and Özgür Gündem twice. Last week, 20 independent online news portals, including Haberdar, Meydan and Medyascope, had already been shutdown following a decision of the TİB.

EFJ president Mogens Blicher Bjerregard and EFJ general secretary Ricardo Gutiérrez called on the European Union and the Council of Europe to act. “We can’t remain silent while journalists are being arrested by dozens right here in front of us. President Juncker and High Representative Mogherini must do everything in their power to end this worrying situation,” said Mogens Blicher Bjerregard.

IFJ president Philippe Leruth said: “ The European union must take a stand and hold President Erdogan accountable for breaching Human rights convention and muzzling the press. Global journalists are highly concerned by the escalation of attacks against the press in a country that calls itself a democracy. This situation must end immediately.”