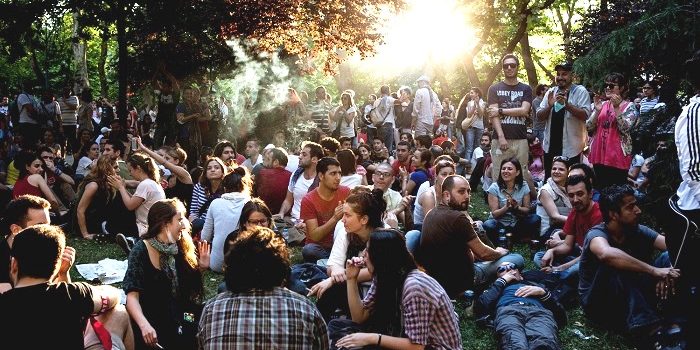 In Turkey’s first-ever direct election of its president Prime Minister Recep Tayyip Erdogan is defending the 12-year legacy of his Justice and Development Party (AKP) in government. Erdogan’s rule faced a major challenge last year when protests over plans to build on a park next to Istanbul’s Taksim Square went national. But the activists now seem pessimistic about their chances of barring his way to the presidency.

“It’s a weird situation to be in Taksim right now,” says Mustafa Kuleli, as he looks at the square from the terrace of a Starbucks. “You walk into the park or you walk into Taksim Square and you remember. That was a turning point for journalists, and also all citizens, everybody agrees that was a historical moment to be here, to feel that solidarity facing the police, water-cannon, teargas … everything.”

Kuleli is the general secretary of one of Turkey’s journalists’ trade union, elected after he took part in the Gezi Park protests.

Those heady days are over now and politics is being played out in the electoral arena with Istanbul festooned with banners for the three candidates – Erdogan, Ekmeleddin Ihsanogluand Selahattin Demirtas, but mostly for Erdogan.

Despite the millions who opposed him on the streets last year, opinion polls show the outgoing prime minister has widespread support and could even win the election on the first round.

So were the protests a waste of time?

“Personally I didn’t tie Gezi Park and daily politics,” says Kuleli. “I think it’s more than that. I think it’s like May ‘68 movement in France. After ’68 a right-wing party gained more votes. But that movement affected 40 years everywhere … all over Europe.”

Ender Imrek is a socialist activist, who is being prosecuted for his leading role in the protests.

“The police entered our homes by force,” he recalls. “We were kept at the police station for four days and they mistreated us. They took our hard disks and our notes and our writings.”

He and four codefendants are accused of masterminding the protests across the whole country.

“I said that I would be very proud to have organised them but millions were on the street and it would be discourteous to them to say something like that,” is Imrek’s reply. “The court wanted to jail us but there was a huge public protest so they didn’t do that. But on 21 November our case will go to trial.”

His Labour Party is supporting left-wing candidate Selhettin Demirtas for president – in a “democratic bloc” against what they see as Erdogan’s growing authoritarian tendencies.

“Erdogan wants to declare his dictatorship in this election and he wants everything to continue as it was in the past,” he says. “We don’t want that, we want democracy and we don’t want things to go as they have in the past.”

Erdogan’s supporters don’t seem too worried about his tough-guy stance.

Cernil is a driver working in Austria who is back in Turkey during the election.

Sitting with his wife on Gezi Park, only partially paved over thanks to the protests, he says it was right to break up the protests.

“Yes, it was a little harsh but who cares?” he asks. “They had gone on for too long so they needed to be punished and, if you look at Europe, if there are any protests the police will intervene.”

There is a mixed crowd on Gezi Park on a sunny weekday morning.

A Kurdish labourer brandishing a beer can says he saw police stop campaigners put up posters for Dermitas, who is a Kurd himself, and another Kurd also declares his support for the left-winger.

There’s also concern about sectarian divisions in Turkey – both between Kurds and Turks and between majority Sunni Muslims and the Alevi minority, many of whom joined anti-Erdogan rallies.

But whose fault that is changes according to your political and religious affiliation.

“I was not on the side of Erdogan, I used to vote for left-wing parties,” says Ismir, a Sunni textile worker. “But it turned into something sectarian. Alevis started to make a lot of noise and they started to insult us, the Sunnis. That’s why I didn’t like the protests.”

But Feda, just back from studying in the Netherlands, supports the secularist Ihsenoglu and blames Erdogan.

“Rather than supporting the population in Turkey, he is trying to divide them in terms of their religion, their nationality,” she inisists.

If elected president, Erdogan will “get all the power and do whatever he wants according to his beliefs”, she believes.

The division between the two camps is deep and is likely to get deeper after the election.