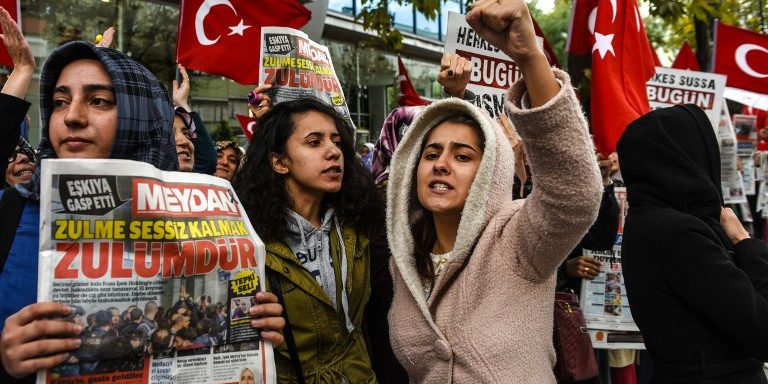 The International and European Federations of Journalists (IFJ and EFJ) today joined their affiliate, the Journalists’ Union of Turkey (TGS, in Turkish), in condemning the police raid of Kanaltürk and Bugün TV, part of pro-opposition media holding Koza-Ipek, this morning in Istanbul.

Police moved in after a court in Ankara on Monday ordered the seizure of Koza-Ipek, accusing the company of “terror propaganda.” The conglomerate is linked to the US-exiled cleric Ferthullah Gullen, a one-time ally of Turkish President Recep Tayyip Erdogan, who has turned the government’s prominent critic, reports said.

According to media reports, the riot police forced their way into the Istanbul headquarters of media outlets Kanaltürk and Bugün TV and harassed some employees of the targeted media outlets who were trying to access their workplace. Kamil Maman, a reporter for the Bugün daily, was harshly treated and then detained by the police, the TGS reported. Police used tear gas and water cannons in the running battles between the police and protesters, including opposition parliamentarians who spoke of a dark day for democracy and described the police action as politically motivated to silence independent media ahead of Sunday general election.

The storming followed the court ruling to appoint a board of trustees to manage the conglomerate and to seize its 21 companies. The Ankara Chief Prosecutor reportedly said that the seizure was linked to an investigation into the conglomerate on suspicion of”terror financing” , “terror propaganda” and other offences related to Koza-Ipek’s support for Gulen’s Hizmet (Service) movement, media added.

The TGS Secretary-General Mustafa Kuleli added that the attack on press freedom by AK Party government is a sign of panic caused by its fear of losing power in the general election after losing its absolute majority in the last poll in June. He stressed the importance of solidarity among journalists to push back against intimidation: “It is again up to us to save ourselves. Solidarity will make us stronger,” he said.

The IFJ and EFJ support their affiliate and remind the Turkish government that the role media in reporting independently on a crucial vote will be one of the determining factors for its credibility and the legitimacy of those who are seeking the mandate to lead the country.

“This latest media clampdown, so close to a vital election , risks undermining the integrity of the electoral process if journalists are denied the opportunity to provide independent, accurate and objective information to the Turkish voters,” said IFJ President Jim Boumelha. “We urge the authorities to respect press freedom and restrain from undue interference in journalists’ affairs, thus ensuring there is a level playing field for – and proper scrutiny of – all those who seeking to hold public office.”

Read the Opens external link in new windowDeclaration adopted last 21 October in Istanbul by the IFJ, the EFJ, Turkish affiliate TGS and other international press freedom organisations expressing solidarity with journalists in Turkey.