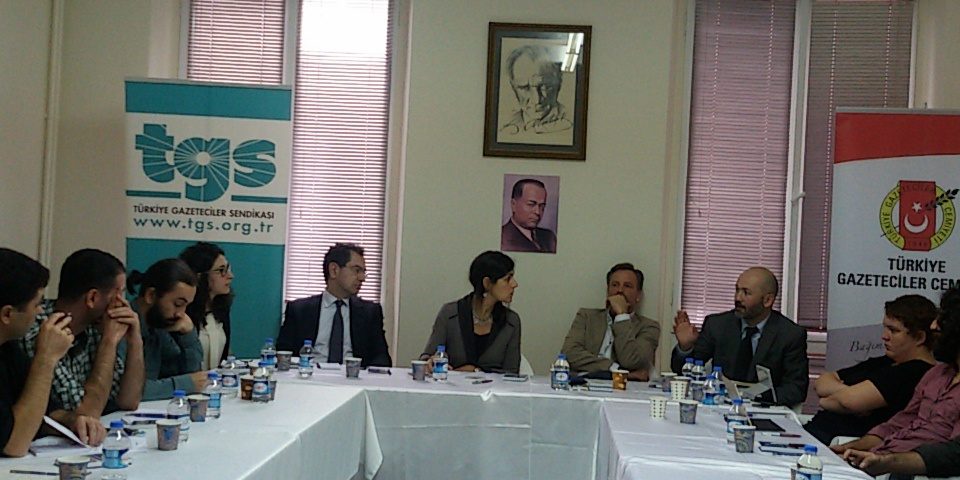 The International and European Federations of Journalists, their Turkish affiliate TGS and seven other international press freedom organisations yesterday adopted a Declaration in Istanbul expressing solidarity with journalists in Turkey.

The Declaration followed an international mission led by the International Press Institute (IPI) from 19 to 21 October, with the participation of the IFJ and the EFJ.

Following the mission, both Federations alerted about the heavy pressures that journalists are suffering, especially within media controlled by AKP’s party and during the pre-electoral period, and called for more actions to guarantee press freedom and pluralism of information in Turkey.

“The IFJ, the EFJ and other organisations must put more pressure at international and national levels to defend press freedom in a country where it is in great danger,” said the IFJ and EFJ representative in the mission, Patrick Kamenka. “Our colleagues are under heavy pressures, especially when a group of pool media is in the hands of the AKP regime, when public TV RTR is not playing the role of pluralism of information especially during the pre-electoral period, thus giving to the regime’s candidates more time to address the people. The IFJ and EFJ must support our affiliate TGS in its difficult union task as pressures are strong in a context of 30% unemployement and low salaries.”

The TGS Secretary General, Mustafa Kuleli, drew attention to the importance of journalist solidarity and how journalists are lining up together against the intimidation. “It is again up to us to save ourselves,” added Kuleli.

Following the conclusion of an Oct. 19 to 21, 2015 joint international emergency press freedom mission to Turkey, representatives of participating international, regional and local groups dedicated to press freedom and free expression find that pressure on journalists operating in Turkey has severely escalated in the period between parliamentary elections held on 7 June and the upcoming elections.

The representatives also determine that this pressure has significantly impacted journalists’ ability to report on matters of public interest freely and independently, and that this pressure, if allowed to continue, is likely to have a significant, negative impact on the ability of voters in Turkey to share and receive necessary information, with a corresponding effect on Turkey’s democracy.

Accordingly, the representatives stand in solidarity with their colleagues in the media in Turkey and demand an immediate end to all pressure that hinders or prevents them from performing their job, or which serves to foster an ongoing climate of self-censorship.

They also urge that steps be taken to ensure that all journalists are able to freely investigate stories involving matters of public interest, including allegations of corruption, the “Kurdish issue”, alleged human rights violations, armed conflict – particularly issues related to the ongoing conflict in Syria – and local or regional issues or policies.

· To end the abuse of anti-terror laws to chill reporting on matters of public interest or criticism of public figures, and to ensure that such laws are both precisely tailored to serve only legitimate ends and interpreted narrowly.

· To reform laws providing criminal penalties for insult and defamation by dealing with such cases under civil law and to end all use of such laws to target journalists, particularly Art. 299, which provides Turkey’s president with heightened protection from criticism, in violation of international standards.

· To enact reforms to free state media outlets from political pressure, e.g., by effecting a transition to a public broadcasting service that presents information from plural and diverse sources.

· To end the use of state agencies, such as tax authorities or others, to apply pressure against journalists who engage in criticism or critical coverage of politicians or government actions.

· To refrain from taking other steps to censor online content, such as the blocking of websites or URLs, or the blocking of social media accounts, absent a legitimate, compelling reason for doing so, subject to independent judicial oversight.

· To release all journalists imprisoned on connection with journalistic activity, and to immediately and unconditionally release VICE News fixer Mohammed Rasool, who remains behind bars despite the release of two British colleagues for whom he was working and with whom he was detained.

· To end all arbitrary detentions and/or deportations of foreign journalists.

· To respect the right of journalists to freely associate and to end pressure brought in recent years against the Journalists Union of Turkey (TGS).

· To end all exercises of direct personal pressure on owners and/or chief editors of critical media.

· To accept the greater degree of criticism that comes with holding public office, to stop using criminal insult or defamation provisions to silence critics, and to publicly call on supporters to refrain from seeking to initiate such cases on his behalf.

Moreover, the mission representatives urge foreign governments, particularly those of the United States and countries within the European Union:

· To press Turkey to uphold its commitments to respect and uphold international human rights standards and, in the case of the EU, to ensure that any concessions granted in connection with resolution of the ongoing refugee crisis are made consistent with a long-term strategy specifically designed to encourage Turkey to comply with its commitments to uphold international human rights standards.

· To avoid the use of negative or hostile rhetoric targeting other journalists and to strive to uphold ethical standards developed by or as the result of self-regulatory bodies or processes.

· To exercise greater solidarity with colleagues under pressure and to defend the rights of all journalists.

The mission was conducted with the support and assistance of the Journalists’ Union of Turkey (TGS) and IPI’s National Committee in Turkey, with representatives of both groups also joining the mission.

The mission was conducted in light of deep concerns over the deteriorating state of press freedom in Turkey and its impact both on the upcoming Nov. 1 parliamentary elections and beyond. Its primary goals were to demonstrate solidarity with colleagues in the media in Turkey, to focus attention in Turkey and abroad on the impact that growing pressure on independent media is likely to have on the ability to hold a free and fair election, and to push for an end to such pressure.

Specific concerns related to, among other developments, physical attacks on journalists and media outlets; raids on media outlets and seizures of publications; threatening rhetoric directed at journalists; the increasing use of criminal insult and anti-terrorism laws targeting independent media and government critics; the ongoing imprisonment of journalists; deportations of foreign journalists; and decisions by satellite and online television providers to stop carrying signals of broadcasters critical of the government.

During the course of meetings in Istanbul and Ankara, mission participants heard from representatives from nearly 20 different major media outlets in Turkey. They also met with representatives of three of the four parties currently holding seats in Turkey’s Grand National Assembly: the Republican People’s Party (CHP), the Nationalist Movement Party (MHP) and the Peoples’ Democratic Party (HDP). Organisers sought to meet with representatives of the Justice and Development Party (AKP), but were not afforded an opportunity to do so.

At the close of the mission, participants conducted a dialogue forum bringing together representatives from a broad cross section of media in Turkey for an open discussion to share with them the participants’ experience in Ankara meeting with foreign diplomats and representatives of political parties, and to hear the media representatives’ concerns and suggestions for how international organisations can best support press freedom and free expression in Turkey.

The International Press Institute (IPI) is a global network of editors, media executives and leading journalists dedicated to furthering and safeguarding press freedom, promoting the free flow of news and information, and improving the practices of journalism.

The Committee to Protect Journalists (CPJ) is an independent, non-profit organisation that works to safeguard press freedom worldwide.

Reporters Without Borders (RSF)is a non-profit organisation which defends the freedom to be informed and to inform others throughout the world. The International Federation of Journalists (IFJ) is a global union federation of journalists’ trade unions that aims to protect and strengthen the rights and freedoms of journalists.

Article 19 is a human rights organisation that fights for the protection of freedom of expression and access to information, particularly protecting those that dissent.

Index on Censorship is an international human rights organisation that promotes and defends the fundamental right to freedom of expression and campaigns against censorship.