IFJ, EFJ and TGS demand an end to oppression of journalists in post-election Turkey 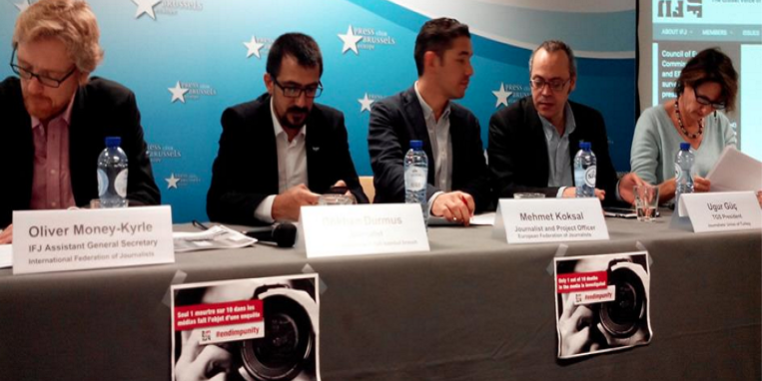 Brussels, 6 November 2015. – The International and European Federations of Journalists (IFJ and EFJ) and their affiliate the Journalists Union of Turkey (TGS) reviewed the implications for journalists and trade union rights following the victory of the Justice and Development Party (AKP) in the re-run of Turkey’s national elections this weekend, during a press briefing at the Brussels Press Club Europe, 5 November 2015.

Anthony Bellanger IFJ General Secretary said that “Before Sunday’s elections, to be a journalist in Turkey wasn’t easy but now it will be even more difficult. Turkey was the biggest prison for journalists in Europe with around 20 journalists still held in prisons to date. Journalists should never be jailed for doing their job. It is time for Intergovernmental organisations to take action against countries that do not respect journalists’ rights.”

Ugur Güç, TGS President, said: “80% of the people in Turkey access news solely through television which is controlled either directly or indirectly by the AKP. Since coming to power in 2002, the AKP has acted to take control of critical media and silence opposition voices. It started first with the take-over of media owned by Cem Uzan, followed by those owned by Dinç Bilgin and the financial institution TMSF giving AKP control over newspapers like Sabah and ATV. The most recent example was the abrupt take-over of Koza Ipek media only days before the election.”

Güc explained how the threat of legal action is used to censor media. “While there are fewer journalists in jail, hundreds of trials are still pending against journalists, many of them for allegedly insulting the President. Today, we cannot pretend that the media are free anymore. Journalists are afraid of quoting the name of president Erdogan because they could be prosecuted for it. The president has built an empire of fear and oppression for press freedom fighters”. And he added that, “The upcoming AKP government will probably try to change the current media law to make it more oppressive for journalists, to make it easy to fire them and harder for them to defend their rights within a trade union.”

Oliver Money-Kyrle, IFJ Assistant General Secretary, described AKP methods to oppress journalists such as prosecutions, the use of economic threats and incentives to punish critical media and reward positive coverage in an attempt to muzzle and control mainstream media. “The last three months has seen an unprecedented assault on journalism by a government desperate to maintain power creating an extremely intimidating atmosphere.” However he underlined that “journalists in Turkey have a strong vision of their role quoting Can Dündar, editor-in-chief of Cumhuriyet newspaper, who said in September that this was the best time to be a journalists in Turkey because journalism was never more important than now. Turkey’s journalists are facing a critical period and for them to survive they need to end the polarization of their profession and reunite under one umbrella, which is the TGS, to protect and defend their professional and fundamental rights.”

Gökhan Durmus, head of TGS Istanbul branch, explained how the government uses economic threats to control media owners. “Many media owners have investments in a wide range of businesses. If their media criticize the government, it puts all their other assets at risk. How can we explain the success of the AKP on 1 November? The fear factor and economic instability have played a big role for the electorate. After the attack in Ankara on 10 October, people were afraid of gathering in public spaces”.

The speakers agreed that European journalists have an important role to play to make the trade unions’ voices heard in Brussels. “Based on all the negative comments made by President Erdogan against foreign media, you can be sure that the reports by European journalists covering Turkey have a direct impact for the people on the ground. Our biggest expectation from the journalists is to continue to report on Turkey,” added Durmus.

The press briefing was organised in the framework of the Campaign to decriminalise Turkish Journalism, to free speech and protect work place rights project which receives the financial support of the European Instrument for Democracy and Human Rights (EIDHR) Program managed by the European Commission. All responsibilities regarding the contents and the actions belong to the authors only and should not be considered as reflecting the views of the European Union.

For further information on IFJ, EFJ and TGS action see

– Conclusions of the Istanbul conference Turkey: Fighting for journalists rights and freedoms in a politically polarized country (17 – 18 September 2015)