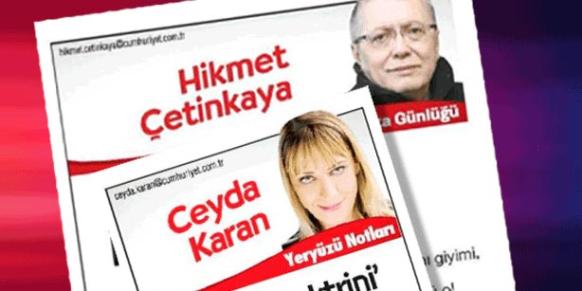 Press unions and associations have strongly criticized Turkish prosecutors for seeking excessive prison sentences for two columnists, Ceyda Karan and Hikmet Çetinkaya, who write for the Cumhuriyet daily, for their articles that featured the front cover of the French Charlie Hebdo magazine depicting the Prophet Muhammad.

According to the Cumhuriyet daily’s website, an indictment in the case was recently completed. The indictment reportedly seeks a custodial sentence of up to four-and-a-half years for each of the two columnists on charges of “openly insulting religious values adopted by sections of society.”

The investigation of the two columnists was reportedly launched after complaints from 1,280 individuals.

Speaking to Today’s Zaman, Karan said the image published in their columns by the Cumhuriyet daily did not include any insulting content. She questioned why the prosecutors had launched a trial against the columnists, who were merely defending the magazine’s freedom of expression, instead of launching a trial against those who had threatened them with a banner held in front of the newspaper’s headquarters, which read, “Our C-4 explosives are ready.”

Karan said that the trial would be a case based on rights and freedoms against those “peddlers of religion who try to legitimize terrorism and violence with their ideological ambitions.” She added that such punishments could only take place in authoritarian and fascist regimes, emphasizing that they wouldn’t be intimidated by such trials.

In January the Cumhuriyet daily published a selection of cartoons from an issue of Charlie Hebdo, translating them into Turkish, in a show of solidarity with the weekly magazine after 12 people were killed in a massacre at its Paris headquarters on Jan. 7. The assailants said they had attacked Charlie Hebdo staff to avenge Prophet Muhammad, who was depicted in a number of caricatures by the magazine.

Although the four pages of Charlie Hebdo cartoons published by Cumhuriyet on Jan. 14 did not feature any images of Prophet Muhammad, columnists Karan and Çetinkaya included the controversial Prophet Muhammad caricature in their articles.

The jail terms being sought for Karan and Çetinkaya drew harsh reactions from representatives of various press unions and associations who emphasized that these columnists cannot be punished with a prison sentence for publishing the controversial caricature.

Journalists Union of Turkey (TGS) Secretary-General Mustafa Kuleli told Today’s Zaman that the two columnists did not publish the controversial caricature to insult any community, but merely to show their solidarity with the attacked magazine in terms of the freedom of the press.

“No one is obligated to show the same level of respect asked by any person or community regarding that person’s faith or religious beliefs,” Kuleli said. “Furthermore, there cannot be any legislation that can determine the limits of the respect towards religious beliefs. As religion is a matter of the heart, its limits cannot be determined via laws or punishments.”

Saying that he does not believe religious leaders or prophets need to be protected via laws, Kuleli added: “It is not something that can be punished via laws. This is a clear violation of freedom of expression. They [the columnists] do not have any intention to insult.”

Charlie Hebdo is well known for courting controversy with satirical attacks on political and religious leaders.