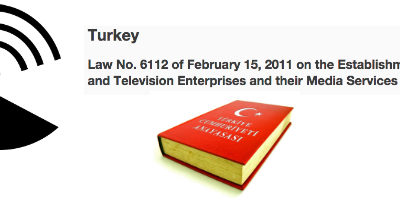 According to several media reports, the Ankara Chief Public Prosecutor’s Office has urged the Communications Ministry to hamper all media communications linked to the Gülen movement by withdrawing state means used to facilitate the broadcasts. If executed, the general request will lead to forbid specific opposition TV channels to use satellite infrastructure controlled by the state.

The office’s Bureau for Crimes against the Constitutional Order sent the Ministry a written request on April 26 to target the broadcasting and publication of TV channels, radio stations, print media outlets and websites owned by the Gülen movement claiming that the US-based preacher Gülen used these means to convey his messages and violate Turkish laws.

Barry White, from the National Union of Journalists (NUJ, UK & Ireland) and representative of the European Federation of Journalists (EFJ) said, “One of the pillars of democracy is the open and wide debate of ideas and information that should be accessible to all. If reports about the Ministry of Transportation, Maritime Affairs and Communications which has been asked to stop critical media outlets from using the state’s communications infrastructure are true, this represents a serious blow to democracy and the public’s right to know and be informed. It is crude state censorship. It is also significant that this attack on the freedom of the press is being threatened in the run-up to the general election.”

The Freedom for Journalists Platform (GÖP) in Turkey issued a statement indicating that this judicial request clearly violates the Turkish Constitution and the national laws regarding the press freedom and the freedom to publish. Turgay Olcayto of the GÖP said, “The prosecutor’s request is violating specific disposition regarding press freedom principles as described in the Constitution of the Republic of Turkey. It is also violating law number 6112 regulating the services that must be provided by the radio and television institutions and the directives relating to the obligations in terms of services and financial management that must be provided between different partners. It is unthinkable that the prosecutor’s office could on its own prevent press freedom by taking a single administrative decision.”

During a press conference on 18 May in Brussels, the Turkey’s Minister of Foreign Affairs Mevlut Cavusoglu stated that “neither a prosecutor, nor a judge or any judicial representative has the ability to take such a general decision or issue a request in order to silence critical journalists. This is against the rule of law and against the freedom of expression”.