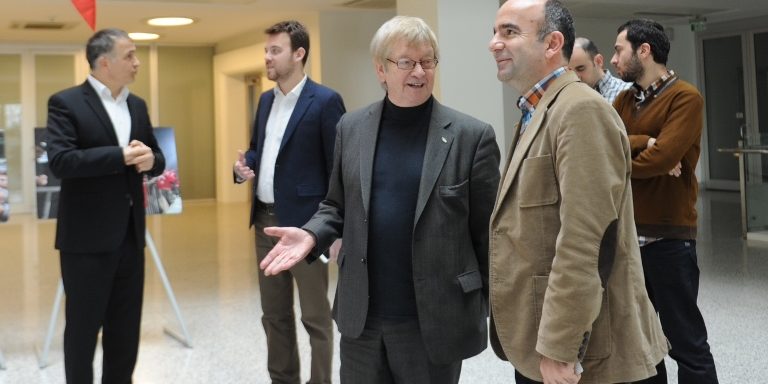 The journalists are being sued by the President Recep Tayyip Erdogan, his wife Emine and son Bilal for violation of privacy and defamation following their reporting of corruption probes in Turkish politics. The case was adjourned to 26 March 2015.

Barry White also visited the offices of the daily newspaper Birgün where a number of journalists, including the editor-in-chief, are also facing serious charges and court appearances for their reporting.

“We follow with great concern the worrying evolution of press freedom in Turkey but we will continue to support the TGS and stand in solidarity with our colleagues,” said White.

The next day, Barry White attended the OdaTV trial where investigative journalists are accused of being members of a secret illegal organisation trying to topple the government. The defendants, who have been under investigation since February 2011, were left deeply disappointed when the Court again adjourned the case until 12 June 2015, just after the next parliamentary elections. The EFJ/IFJ presence to support the colleagues was highly appreciated as a visible sign of solidarity. Barry White published on his blog a complementary report on OdaTV trial monitoring mission.

In Istanbul, Barry White also met editor-in-chief Ekrem Dumanli and other journalists working for the daily Zaman newspaper which was raided on 14 December. As a recent resolution adopted by the Members of the European Parliament (MEP) recalls the Turkish police raided and briefly detained a number of journalists and media representatives for leaking classified information to undermine the state. The EFJ-IFJ representative also expressed the solidarity of European journalists against the excessive repressive measures used against journalists in Turkey.