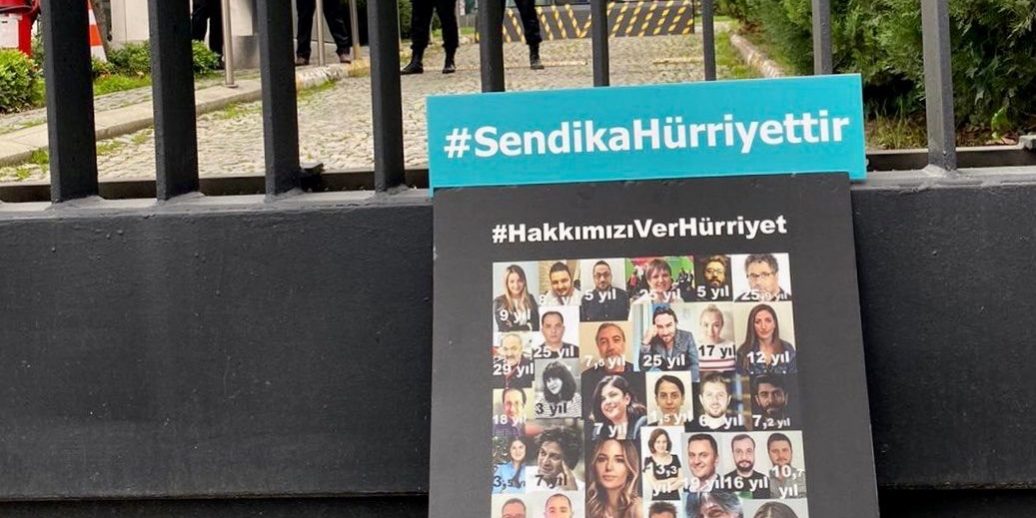 The Journalists’ Union of Turkey (TGS) has vowed to fight against Hurriyet newspaper’s “illegal” decision to fire 45 of its unionized employees.

TGS President Gokhan Durmus stressed during a press conference with more than a dozen Hurriyet journalists at TGS Academy in Istanbul on Nov. 6 that the firings violated Turkey’s Constitution and labor laws.

“No one can be forced to become a member or quit from the membership of a labor union. This is what the 51th article of the Republic of Turkey’s Constitution stipulates. However, Hurriyet fired 45 of our unionized colleagues last week. Some of these colleagues had spent half of their lives at Hurriyet and they have been fired only because they were members of our union,” Durmus said.

A journalist who was on leave to give birth, as well as another one who was about to complete his compulsory military service, were among the ones who were fired with a written notice sent to their homes.

“Our struggle is for a better future for the baby whose mother gave birth on the day that she was fired,” Durmus added.

While inviting Turkish prosecutors to launch an investigation into Hurriyet, which is owned by the Demiroren Media Group, Durmus noted that the TGS “will do everything in its power to guarantee the legal rights of the journalists who were fired.”

‘The law of the jungle will come to an end’

“The law of the jungle in Turkey’s media environment will come to an end and the TGS will establish a unionized working environment. No boss will be able to act arbitrarily anymore,” Durmus said, calling on Demiroren’s administration to “respect the unionization rights of Hurriyet journalists and sit down at the table with the union.”

Sebnem Turhan, one of the journalists who were fired from Hurriyet’s economy department, also spoke at the press conference. “I’ve been a journalist for 21 years. I started the profession in the late 1990s during an economic crisis. I covered several consequent crises during my career. We saw many years that we did not receive any salary raise,” she said to explain that many journalists in Turkey have been feeling the worsening economy “in their pockets” amid high inflation.

‘We are powerful as long as we are together’

She added: “All we learned in this process is that media employees cannot do anything alone. I’ve never been so distant from the struggle for union. My job as an economy correspondent covered this area as well. This is why we became members of the TGS. Because we wanted a collective agreement. We are powerful as long as we are together, with the union.”

Hurriyet’s decision to fire dozens of journalists, including several senior reporters and editors, was an unprecedented move that triggered an outrage among press freedom advocates.

Most of the managing editors, reporters and other personnel who were laid off received the notice on Oct. 31, which was delivered to their homes while they were still working at the newspaper’s headquarters in Istanbul.

Vahap Munyar, Hurriyet’s editor-in-chief, reportedly resigned in protest over the firings, which were ordered by the newspaper’s board of directors outside of his knowledge.

A vast majority of newsrooms in Turkey were de-unionized by media magnates in the 1990s through a mixture of firings, coercion and incentives.

Hurriyet was bought by the pro-government conglomerate Demiroren last year. Many critics said the firings were part of the government’s broader attempts against free speech. Unconfirmed reports have been suggesting in recent months that Demiroren were in negotiations to sell Hurriyet and other media assets to Turkuvaz group, which is controlled by the brother of President Recep Tayyip Erdogan’s son-in-law Berat Albayrak, who is also Turkey’s treasury and finance minister.